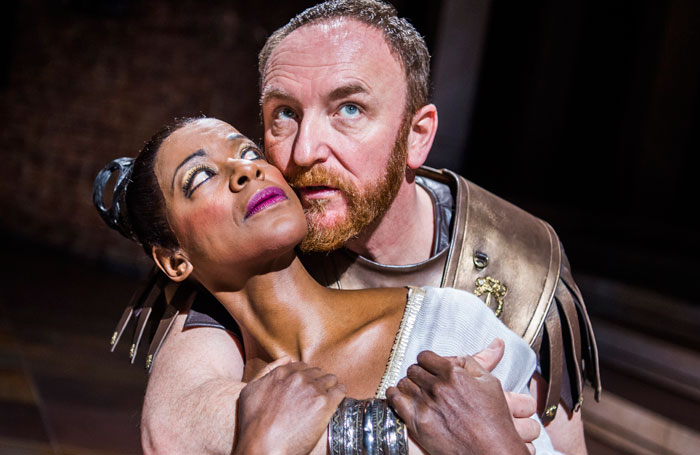 When a production transfers, changes are inevitable. Different spaces create different possibilities and limitations, for actors, directors and designers alike. For the audience then, the entire experience of watching a show in one theatre and another may be wholly different.

Part of the Royal Shakespeare Company’s Rome MMXVII Season, Antony & Cleopatra is one of four shows to transfer to the Barbican. Rather than lose anything, Iqbal Khan’s production gains something in this move. Playing in a proscenium arch theatre, the show and Robert Innes Hopkins’ dynamic design cry out: “Here is my space”.

Antony & Cleopatra follows on from the fallout of Julius Caesar, with a number of the incredible ensemble appearing in both plays this season. Having avenged Caesar’s death, Mark Antony, Octavius Caesar and Lepidus attempt to re-establish order throughout the world by ruling jointly as triumvirs. But while Caesar concerns himself with affairs of the state, Antony seems more concerned with affairs of another kind abroad.

Utterly enamoured by the Queen of Egypt, Antony and Cleopatra are partners of greatness. Antony Byrne and Josette Simon likewise “stand up peerless”, a formidable pairing for the ages. Keeping breath for breath and blow for blow in their verse, you see why Antony keeps away from home and his wife Fulvia.

Red and gold adorn the Alexandrian palace, a lavish seat of power and luxury in Hopkins’ design. But this Egypt is another world for a war-worn Antony. Conspirators masks are now replaced with masks of revelry. The screams of battles replaced with songs and merriment.

Rich harmonies attend on Cleopatra, arranged beautifully by Laura Mvula with accompaniment from a live band. But the trumpets of war are never far off. As the scenes turn from a celebratory Egypt to a solemn Rome, we see an anxious Octavius dealing with the threat of uprising from Pompey and later Antony.

As war looms over the world, the Capitol changes to a barren docks. Tall and proud, weathering the elements, it almost looks like the ruins of the city itself. Transferring from the intimate Royal Shakespeare Theatre, the Barbican stage somehow never feels empty or vast. Hopkins’ set frames the piece brilliantly: this is his space.

As scenes change and adversaries rise and fall, this is quite literally reflected in the set; pieces ascend and descend, each bearing a character at their particular high or low. We are constantly aware that this is a Rome building itself anew, an empire in its infancy. Khan brilliantly draws this theme out, each character in this world very much a “child o’the time”.

Octavius is the very picture of this. He “wears the rose / Of youth upon him”, as Ben Allen breaks and starts in outbursts from this new ruler. Allen still maintains a keen grasp on the verse, even in Octavius’s moments of anger. He reels of the names of invading kings, as easily as if he were reading a shopping list.

Simon proves similarly impulsive as Cleopatra. Dealing in extremes of emotions, her Cleopatra is unpreditable, to both Antony and the audience. In a jarring but jaunty portrayal, you don’t know if she’s about to laugh or cry as she seemingly surrenders to Octavius.

If Octavius is the rising man, then Antony is the “falling man”. Byrne’s performance reveals the cracks beginning to show, rooted in a deep sorrow. He brings the room to silence and holds it there, knowing just how to pitch each moment to everyone in the vast Barbican Theatre.

This leads to some wonderful, understated moments. On hearing some fateful news, he reaches back, not to faint. To hold someone’s hand. It’s such a gentle gesture, but one of so many from Byrne which imbues his Antony with such depth.

While Hopkins sets the stage for success, it’s rather what happens off stage which blemishes the piece. Exposition after exposition bombard the audience, the establishing of this dramatic world slowing down the first half. Swathes of the original text could have been cut, bringing more onto the stage.

The pacing does improve in the second half, though the only staged fight does feel anti-climactic. Taking place on the sea, it’s less dramatic and more like Battleships meets Shuttle-board.

Rich in both the details of this dramatic world and those of the bigger world outside of it, Antony & Cleopatra seems a poorly paced but perfectly pitched production.