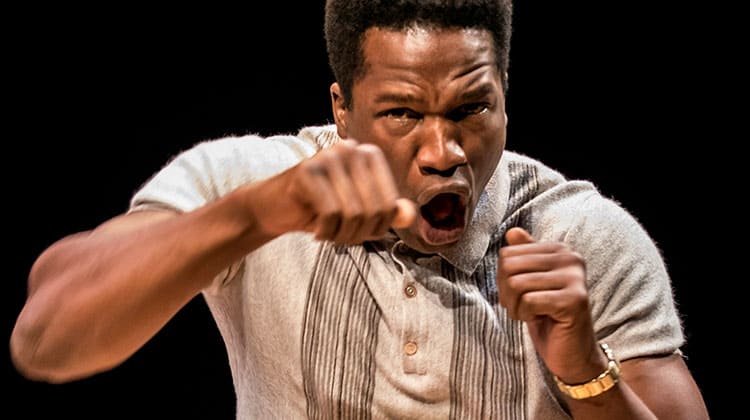 The night in question is 25 February 1964.  After defeating Sonny Liston for the world heavyweight boxing title, the 22 year old Cassius Clay celebrated not by hitting the town but by meeting up in a cheap Miami motel room with three friends:  Malcolm X, the Nation of Islam activist; Sam Cooke, the “King of Soul”, and Jim Brown, the American football star.  That much is known.  As is the fact that the next morning the new champ announced his intention of changing his name to Cassius X (later Muhammad Ali) and of joining the Nation of Islam.  In his rich and fascinating 2013 play, Kemp Powers imagines the conversations that might have taken place that night, fuelled by nothing more stimulating than vanilla ice-cream.

Kwame Kwei-Armah directed the piece in Baltimore last year.  His assured, superlatively well-cast production at the Donmar marks its first outing since the death of Ali in June.  The exacerbated racial tensions in the United States make it feel especially timely as we remember the hopes of the Civil Rights movement of the Sixties (the play eventually resounds to Cooke’s visionary “A Change Is Gonna Come” – the song that Barack Obama referenced on the night of his election) in light of the painful recent evidence of just how much there is left to be achieved.

It would be wrong, though, to run away with the idea that this is a solemn or portentous work.  As the production engagingly establishes, the default mode of this foursome is the warm, profane banter of close friends.  There’s a nerviness, though, because each of these men is in the process of self-reinvention and they have acrimonious differences about how best a prominent African-American can further the cause of his people.  Sope Dirisu beautifully captures both the mischievous charm and full-of-beans (“Why am I so pretty?”) cockiness of Clay and his uncertainties about the momentous step, guaranteeing nation-wide vilification, that he is poised to make.  The central strain of the drama is the fight for the boxer’s soul between Francois Battiste’s complexly sardonic and aloof Malcolm X with his separatist view that blacks should be independent and self-sufficient and the craftier Sam Cooke (Arinze Kene – in ravishing voice).  To Malcolm’s charge that he tailors his sound for the taste of white audiences, Cooke ripostes that he started a label, owns the rights to his songs and that he’s the one raking in the money from the white-artist cover versions.  “You tell me, how is that not empowerment?”.  He doesn’t just want a piece of the pie: “I want the damn recipe”.

Sensitive issues and difficult questions are aired – skin colour and degrees of blackness; “Do you expect a dog to give you a medal just because you didn’t kick it that day?” asks David Ajala’s strapping, witty Jim Brown, explaining his preference for in-yer-face racist rednecks over patronising, self-congratulatory liberals; the embarrassment that a white kid called Bob Dylan has written a song (“Blowing in the Wind”) that speaks so eloquently to the struggles of the black people.  There were only a couple of moments when I felt that the piece relied too heavily on the benefit of hindsight; contrariwise,  it may be that those who very little about Malcolm X will be unduly puzzled about the reasons for the troubled relationship with the Nation of Islam that we see mysteriously depicted here.  In the main, though, the play summons up what was pivotal about this moment with great power – an illuminating and enlightening experience.